By John Tamblin on February 7, 2018 in Uncategorized

Ok, so the dream of retiring young enough that you still have your health to enable you to maximise those golden years is, well let’s face it, exactly that. A dream. For most, if you ask them at what age would they wish to retire, more often than not they answer “Retire?!? I can’t ever see me being able to retire let alone early!

So what’s the answer?

Well, unfortunately there are no secret short cuts to funding a fruitful retirement, unless you win a substantial amount of money or inherit it. Either way not exactly guaranteed.

However, there are things you can do to give yourself a fighting chance.

Here are 8 retirement plan useful tips to help you get the retirement you want:

1. Start young . Very young. If you have children or Grandchildren, why not look at starting something for them, ok so it wont help you, but if you do it they may do it for their children and grandchildren.

2. Act while you can . You don’t have to put huge sums of money in to a pension. As long as you do it early enough. The effects of compounding can have serious effects on your future. For example, someone aged 25 who saves £100 a month that rolls up by 7 per cent a year can look forward to having a fund of more than £200,000 at the age of 65. But someone who waits just five years before saving the same monthly sum would retire with less than £145,000.

3. Make the most of the governments tax relief . While complex, in basic terms the government want to reward you for paying in to a pension, so for money that you pay in they will also contribute buy way of tax relief. Depending on your tax position will depend on how much they add.

4. Pay off any debt as early as possible . The longer you are paying debt the more that it will be costing in interest payments and the less you will be able to use from your income to fund that crucial pension pot.

5. Know what plans you have and keep them reviewed . In a lot of cases people move employer every few years and as such the pension pot that has been accrued will be forgotten about. It is important that you keep tabs on where your money is and how its performing. In addition, find out what charges are associated with each scheme.

6. Plan ahead . While none of us know the future we can make some educated guestimates and can plan on what we would like to happen in retirement. If we know what we want to happen we can then start to plan for how much its likely to cost.

7. Know what you are entitled to . The rules and figures for state pensions change, but there is no harm in contact them to find out what your state pension forecast may be based on your current contributions.

8. Lastly. Don’t bury your head . Ask questions and seek assistance if necessary. Don’t just expect that it will be ok when you get to later life, which will come around quicker than you may think. Don’t rely on parents or grandparents to fund it for you through inheritance. While possible, it isn’t certain. Lots of events out of your control can very quickly prevent that.

If you want to know more about the subject of retirement, contact us to make an appointment.  You can contact John Tamblin directly by calling 07880 795710 for a no-obligation chat.

The Risks of Long-term Cash Savings
Should you take 25% of your pension tax free?

Tips for making your money work hard for you 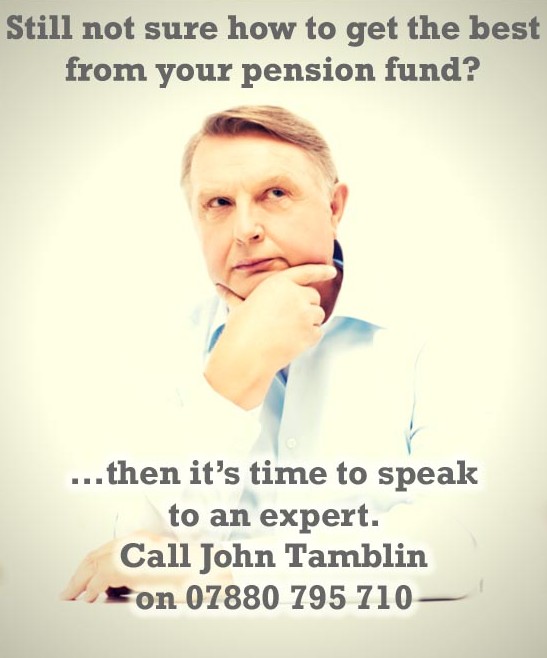 No matter what stage in life you may find yourself it is essential that you review your retirement plans regularly.
Call John Tamblin Financial Services now on 07880 795710 for a no-obligation chat about your individual circumstances.

NB. The value of pension and investments and the income they produce can fall as well as rise. You may get back less than you invested

Write to John at:

John Tamblin Financial Services Ltd is authorised and regulated by the Financial Conduct Authority – FSR No. 717987.
Registered as a Limited Company in England and Wales No. 0975109.

The guidance and/or advice contained within this website is subject to the UK regulatory regime, and is therefore targeted at consumers based in the UK.